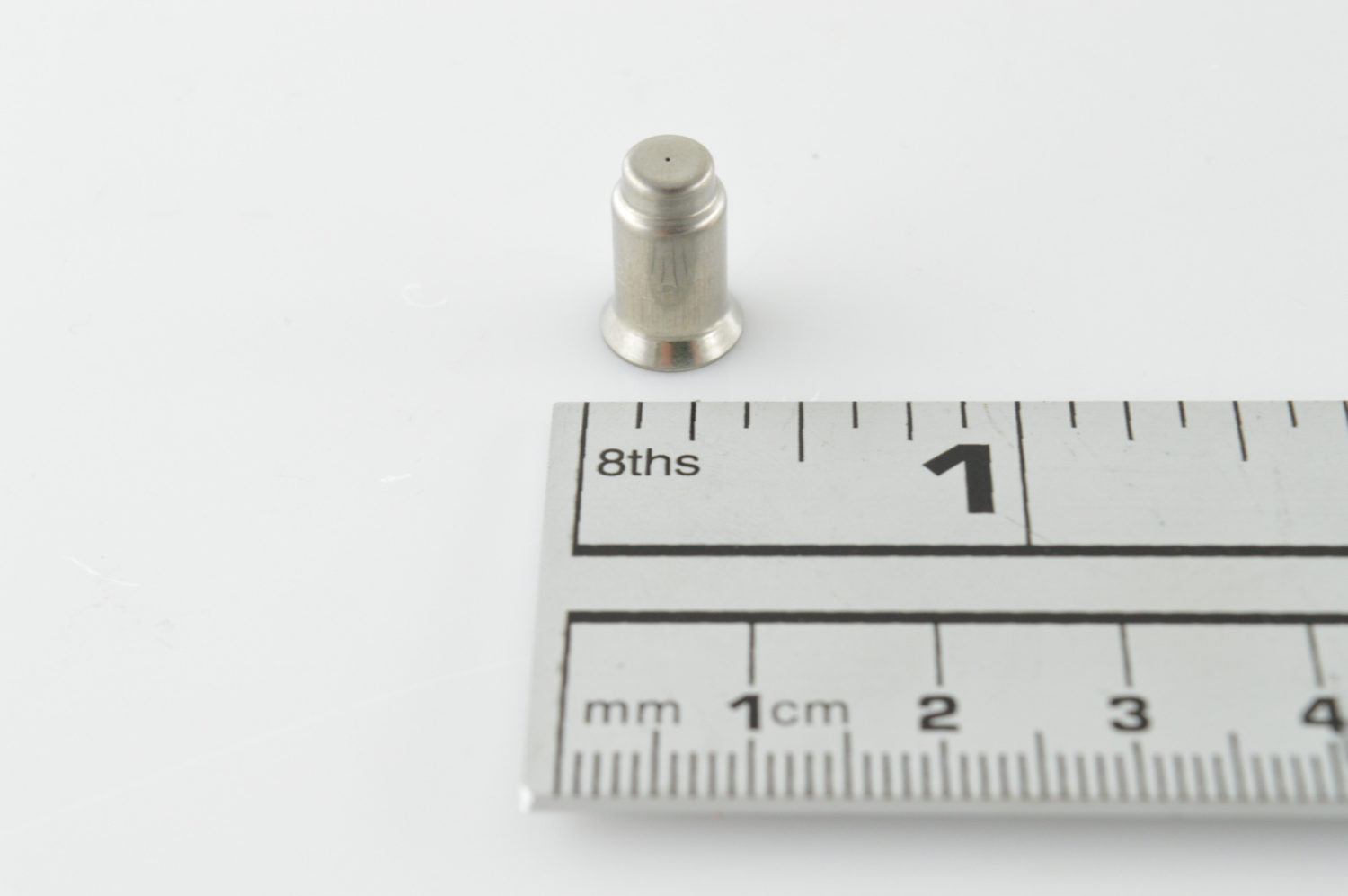 When it comes to gas fireplace repair, it is important to know which type of fireplace you have, how gas fireplaces function, and be able to identify the parts so that you can have a better understanding what you are looking at when repairing a gas fireplace.

For diagnosing purposes it is easiest to categorize fireplaces by their control system. And probably the easiest way to tell which type of system your gas fireplace uses is to determine how you would normally operate it.

There are basically 3 different types of gas fireplaces:

With a milivolt system, your fireplace would have a pilot light that is designed to run continuously even when your fireplace is not turned on.  They also use a wall switch, remote control, or toggle switch to turn on and off the burner flame.

The “IPI” part in IPI systems stands for “intermittent pilot ignition”.  With this system you will not have a pilot light that runs when the fireplace is off.  With IPI systems you will still use a wall switch, remote control, or toggle switch to turn on the fireplace. The difference between IPI and millivolt systems is that when you turn the fireplace on, the control system will ignite the pilot with an automatic spark igniter before it lights the burner.  Typically you will hear the clicking noises from the igniter sparking after you turn the wall switch on.

With a safety pilot system, you will have a pilot light that runs continuously but in order to turn the fireplace on, there will be a knob or a stem you will have to manually turn in order to ignite the main burner instead of a wall switch, remote or toggle switch.

You can also look at your rating place (see our What Type of Gas Fireplace Do I Have? page to see where to find your rating plate) and most often it will tell you what type of gas fireplace you have.

The most common type of gas fireplace uses a millivolt system. Here is how they work:

A millivolt system gets its power from the pilot light. The anatomy of a pilot light will look something like this: 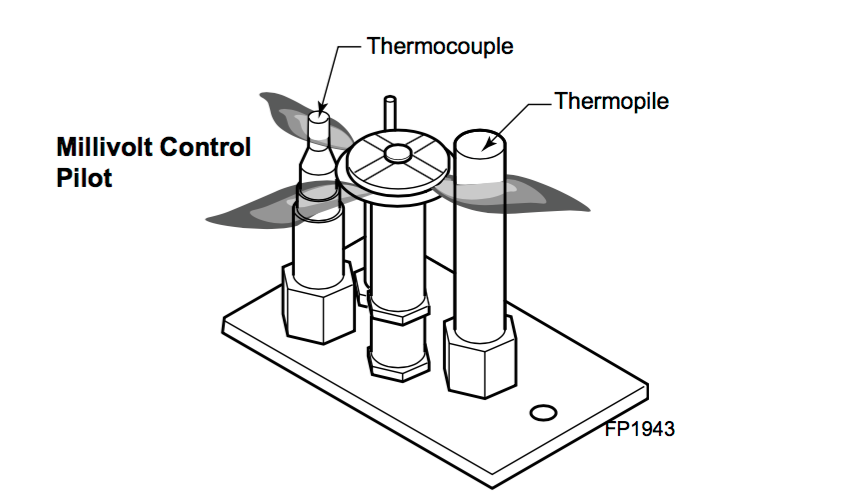 To put it simply, the pilot light consists of three main parts.

Although a pilot assembly will usually have both a thermocouple and a thermopile, some millivolt systems will only use a thermopile.  Also, most of the time gas fireplaces also have some sort of spark ignition system (commonly called piezo ignitor) to help assist you in relighting your pilot so you don’t have to manually light it with a match. The piezo ignitor is usually connected to a button that will create a spark when the button is depressed.

With millivolt systems, when the pilot flame is burning, it will heat up both the thermocouple and thermopile sensors. These sensors are made out of a material that creates a small amount of voltage (under 1 volt) when heat is applied to it. 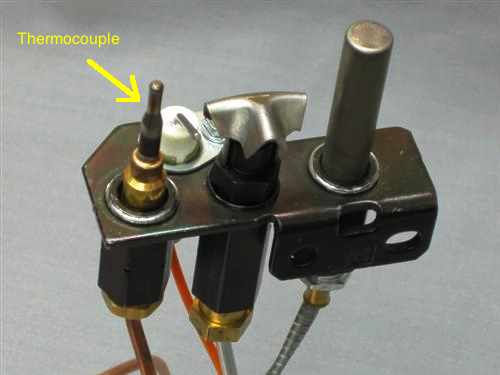 Testing your thermocouple for your gas fireplace repair

The thermocouple will create around 20-30 millivolts when enough heat is applied to it (.03 volts which is less voltage than you can physically feel). This sensor is connected to the main control valve. The thermocouple will create enough electricity to keep an electromagnet in the gas valve open, which controls gas flow to the pilot assembly. This is why the pilot will stay lit on its own after the pilot runs long enough to heat up the thermocouple. This is also why it will stop releasing gas if your pilot light goes out, which is important for safety reasons. 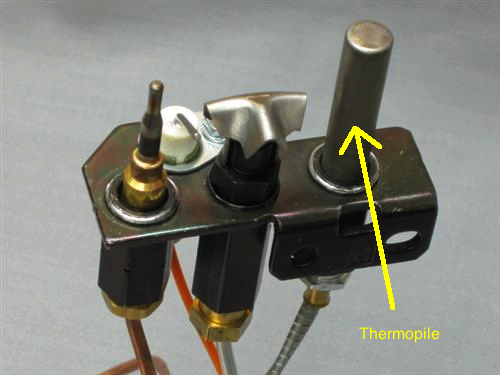 The thermopile sensor on a gas fireplace

The thermopile is basically just a large thermocouple (actually a group of thermocouples inside a metal shell). But instead of creating 20-30 millivolts, it generates up to 900 millivolts. Although this seems like a lot, this is still under one volt of electricity (again not enough to even feel) but has enough power to open an electromagnet inside the main burner when you press your wall switch.

Here is a video overview that identifies the parts of a gas fireplace: 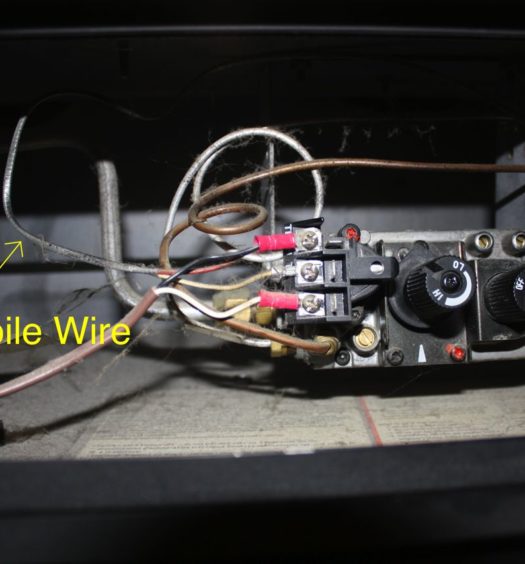 Repairing Your Fireplace Yourself Is Easier Than You Think

Read More
Repairing Your Fireplace Yourself Is Easier Than You Think 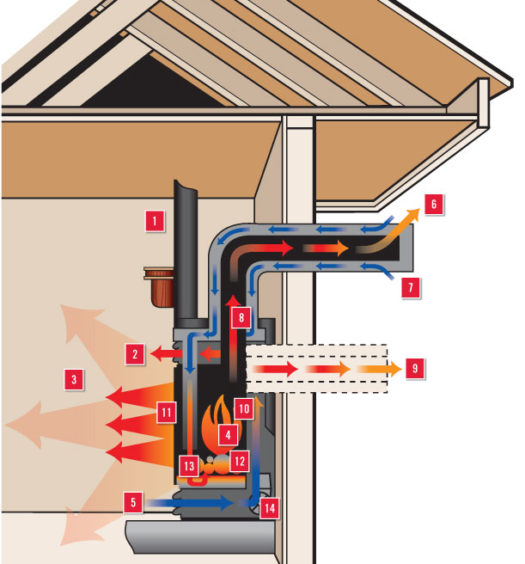